by Tara Klamrowski
50 Cent’s moniker has ceased being figurative— the rapper and business mogul has filed for bankruptcy in Connecticut’s Bankruptcy Court.
Curtis James Jackson III, known by his stage name “50 Cent” or “Fiddy”, started his career as a successful rap artist, rising to the top of the charts and taking in millions of dollars in royalties annually. Fiddy started investing in business ventures in a variety of areas, including the beverages industry, music, clothing, technology, and energy. Vitamin Water has been Fiddy’s most successful business to date— when the company to Coca Cola in 2007, his minority shareholder stake earned him $100 million. Last year, he was named to Forbes’ Top Five Wealthiest Rappers, with an estimated net worth exceeding $140 million.
So, what happened to all that money? Well, Fiddy’s bankruptcy filing does not reveal much. At only five pages, his Chapter 11 petition discloses only the bare minimum for Fiddy to file a legitimate claim to get in the door. According to the petition, both his assets and liabilities are listed between the $10 million to $50 million range. However, just because he filed for bankruptcy doesn’t mean he is completely broke. Some have speculated that while he may have cash flow problems, this filing might have another, more strategic purpose.
In addition to his bankruptcy suit, Fiddy is also defending a lawsuit filed over his release of a sex tape. Apparently, while embroiled in a feud with rapper Rick Ross, Fiddy decided to post a sex tape on the internet featuring the mother of one of Rick Ross’s children without her permission. The plaintiff, Lastonia Leviston, has requested punitive damages against Fiddy, in addition to the $5 million in compensatory damages she’s already been awarded by the jury.
By filing a petition in bankruptcy court, Fiddy and his legal team have placed an automatic hold on Leviston’s case against him. Leviston has filed a motion for relief  in order to lift the automatic stay so she can move forward with the punitive damages phase of her case. Despite Fiddy’s objection, the court granted Leviston’s motion to waive the stay.
As Fiddy’s bankruptcy case moves forward, many of the financial details of his money troubles will be revealed in the coming days and weeks. To keep up with the latest case developments, you can set up a Docket Alarm email alert by selecting Track This Docket on 50 Cent’s bankruptcy docket.

by Tara Klamrowski
On July 26, the Supreme Court ruled in Obergefell v. Hodges that states must recognize same-sex marriage. The long awaited decision was 5-4, with Justice Kennedy casting the swing vote in favor of upholding same-sex unions. In his opinion for the majority, Kennedy wrote:
No union is more profound than marriage, for it embodies the highest ideals of love, fidelity, devotion, sacrifice, and family. In forming a marital union, two people become something greater than once they were. As some of the petitioners in these cases demonstrate, marriage embodies a love that may endure even past death. It would misunderstand these men and women to say they disrespect the idea of marriage. Their plea is that they do respect it, respect it so deeply that they seek to find its fulfillment for themselves. Their hope is not to be condemned to live in loneliness, excluded from one of civilization’s oldest institutions. They ask for equal dignity in the eyes of the law. The Constitution grants them that right.
Obergefell v. Hodges, 576 U.S.    (2015).
Citing the 14th Amendment, the ruling reversed the decision of the lower court, the United States Court of Appeal for the Sixth Circuit, which had ruled, “[a] state had no constitutional obligation to license same-sex marriages or to recognize same-sex marriages performed out of state.” Obergefell, 576 U.S.   (2015). Originally, Obergefell v. Hodges consisted of three separate suits filed by same sex couples challenging bans on gay marriage in several states, including Ohio, Kentucky, Michigan, and Tennessee.
News of the decision traveled swiftly, with media outlets and social media buzzing not long after it was published. News organizations lauded the decision as being in the same echelon as other historically important SCOTUS decisions, such as Brown v. Board of Education and Roe v. Wade. The hashtag #lovewins was trending on Twitter, with thousands of people and organizations tweeting and posting about the case outcome. Even Facebook got involved in the announcement— the social networking site gave users the ability to put a rainbow overlay on their profile pictures, flooding the newsfeed with rainbow photos after the news broke.
In mere minutes, media outlets and social networking sites featured articles and stories on the ruling. As evidenced by the speed at which news of the SCOTUS decision traveled, the world of internet news is highly competitive. Docket Alarm can help you stay ahead of the latest legal news, including Supreme Court decisions. Docket Alarm’s alert tools send email updates the minute a decision is published, ensuring you will be the first to know of the latest SCOTUS developments.
Check out this list of Supreme Court dockets, and hit the “Track this Search” button to receive email alerts whenever a new docket is filed.  To track any individual case, just click on a result, and select “Track This Docket” to receive alerts whenever a new petition is granted, or when a decision is published.
For example, you can receive alerts on the highly anticipated affirmative action case Fisher v. University of Texas at Austin by clicking here, and selecting “Track this Docket.”
Receive alerts once a week, daily, or even continuously. Email alerts contain a PDF attachment of the update or filing, eliminating the need to log into the platform. With Docket Alarm’s email alert tool, you will always be one step ahead of breaking legal news.
Sign up at www.docketalarm.com to start receiving email alerts on SCOTUS decisions.

How Can I Track Companies Being Sued?

by Tara Klamrowski
Docket Alarm’s comprehensive platform has many tools to help you keep track of companies and their legal affairs.  For example, Docket Alarm’s email alert tool helps keep you informed of the latest litigation developments involving a specific company. When a new lawsuit is filed that the company is a party to, or when there is a new development in an existing case involving that company, an update will be sent right to your inbox.
To create an email alert for a particular company, simply enter the company’s name in Docket Alarm’s Federal Court Case Alert Tool and click on the “View New Lawsuits” button. You will see a list of results showing all lawsuits involving that company, beginning with the most recent and going back in chronological order.

On this page, users have the option to view or track individual lawsuits. Once you click on the “track” button, you will see a box prompting you to select preferences for the email alert you wish to create. The frequency at which you receive email alerts is highly customizable— you can elect to receive alerts on a weekly, daily, or even continuously. Once you have selected your preferences, you simply click the “Start Tracking” button to create the alert for that particular case.
The email alerts sent to your inbox contain a brief summary of the update, along with a PDF attachment of the filing. Because these alerts contain all information relevant to the update, you don’t have to log into the platform to get caught up to speed.
Another way you can track litigation involving a specific company is by clicking on the “Get New Lawsuit Alerts” button at the top of the results page. This allows you to receive email updates at a selected frequency when there is any type of new lawsuit filed against the company you wish to follow. 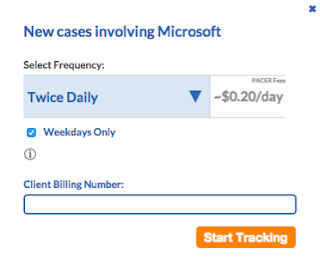 Take advantage of Docket Alarm’s email alerts tool to stay up-to-date on the latest litigation affecting companies by signing up at www.docketalarm.com.