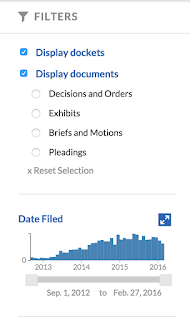 Users can run full text searches across all of this information in a single user-friendly search bar, and use intuitive filters to focus in on the documents they want.

In addition to its robust research platform, Docket Alarm also provides attorneys with an analytics platform for the Patent Trial and Appeal Board, giving users context and insight into this new tribunal. The PTAB analytics platform allows users to get an overview of PTAB activity or view particular analytical profiles of parties, judges, law firms, or stages of proceedings. These analytical profiles include analytics and statistics on petition filings, instituted petitions, instituted claims, canceled or partially canceled claims, and final written decisions. Attorneys can use these analytics to predict outcomes of cases and to help devise winning litigation strategies.


* * *
Docket Alarm is the only research platform that offers patent practitioners a complete PTAB research and analytics platform. Sign up at www.docketalarm.comtoday.
Tara Klamrowski is the director of IP content at One400. She writes about current IP issues, IP trends, and how Docket Alarm can help attorneys and their clients achieve success.

by Tara Klamrowski
Docket Alarm is excited to announce the release of its new search interface.
By integrating useful tools like one-click analytics and automatic case citation directly into your list of search results, the new interface makes legal research easier than ever before. Streamlined and simplified, the new interface also provides attorneys with a more user-friendly experience and significantly faster loading times.
One-Click Analytics
One of the most innovative features of Docket Alarm is the ability to see analytics related to parties, judges, and law firms in PTAB cases. Now, you can access these analytics with a single click directly from your search results. This feature eliminates the need to search for entities separately in Docket Alarm’s analytics platform, giving you the ability to quickly view statistics without disrupting your workflow.
When viewing search results, you can bring up direct links to Docket Alarm’s analytics platform by accessing the “Related” button underneath a case summary. Hover your cursor over the “Related” button to see a drop down menu featuring links to analytic profiles for the judges, parties, and firms involved in the case.
The menu also offers the option of searching within the case, allowing you to quickly find that pleading or motion in a case. 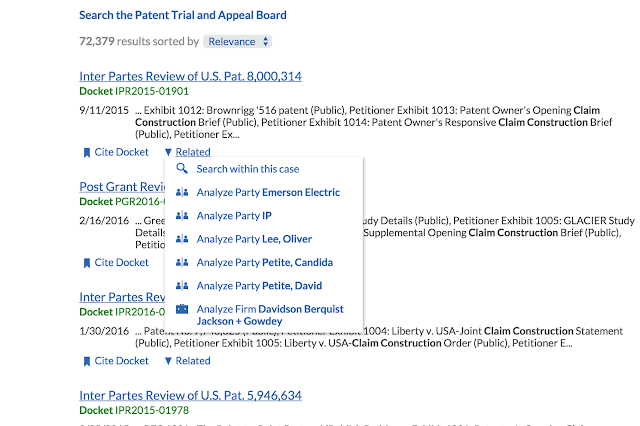 By clicking on an analytics link, you are taken directly to a page displaying various statistics and predictive analytics on the selected party, including petitions filed, petitions instituted, claims canceled, party type, success rates, and much more.
Easily Cite Dockets and Documents
Another useful feature incorporated into the new search interface is the ability to quickly cite cases or documents directly from the search results page. By clicking on “Cite Docket”, the full Blue Book case citation is automatically copied to your clipboard and ready to be pasted directly into a document. This feature is immensely helpful when compiling research or drafting pleadings, memoranda, and other legal documents.
Streamlined Look and Faster Loading
The streamlined design of the new interface promotes efficiency and ease, featuring a left rail containing filters that allow you to quickly pare down results by type, time, or entity, and tabs at the top of the results page offering one-click access to tracking, exporting, and downloading. These design features, in combination with faster loadings times, translate into an effortless and intuitive search experience.
Sign Up
You can experience the innovative features in Docket Alarm’s brand new search interface by signing up today at www.docketalarm.com.
* * *
Docket Alarm is the only research platform that offers patent practitioners a complete PTAB research and analytics platform.
Tara Klamrowski is the director of IP content at One400. She writes about current IP issues, IP trends, and how Docket Alarm can help attorneys and their clients achieve success.

The Turning Tide Against Patent Owners

by Tara Klamrowski
So called "patent trolls" have been all over the news, and with good reason— these entities pose significant risks to the hi-tech industry. But a new tribunal has been shown to be effective at thwarting patent trolls and other overly aggressive patent owners.

Patent trolls are companies that attempt to monetize patents through litigation, with no interest in commercializing a product or advancing the state-of-the-art. Litigation initiated by patent trolls is expensive; just the threat can force a settlement.

With the passage of the America Invents Act ("AIA"), a new tribunal called the Patent Trial and Appeal Board, or "PTAB", was created as an efficient and cost effective means of invalidating patents. The implications for patent trolls looms— the PTAB presents a new and inexpensive proceeding to render their patents invalid, disrupting their business model.

The most common procedure for invalidating a patent at the PTAB is inter partes review ("IPR"). A petition for IPR is filed by a third party, called the "petitioner", against the owner. Often, the petitioner is concurrently involved in a patent infringement lawsuit with the same patent owner. An IPR petition requests that the PTAB invalidate some or all of a patent's claims because the patent is not new (§ 102) or was obvious at the time the patent was filed (§ 103).

The Effect of the PTAB on Patent Owners

Docket Alarm is a legal analytics platform that tracks statistics on IPRs, including how often IPRs get instituted, the number of claims involved, and the outcomes of all final written decisions issued. These statistics can target certain PTAB judges or technology centers, allowing litigants to better estimate their likelihood of success.

Docket Alarm Month-by-Month Histogram of Petitions Instituted in Whole (green),
Instituted in Part (yellow), or Denied (red)
In issued final written decisions, the PTAB cancels all instituted claims in 71% of cases. In the past three months, this average has reduced to 60%. On average, the court cancels 12.9 claims.

Docket Alarm Histograms of Instituted and Canceled Claims
These numbers suggest that this new proceeding is having a large impact on patent owners, presenting an entirely new way to challenge patents. And, although the court is often willing to institute a petition, there is a high likelihood that the challenged claims will be canceled.
Docket Alarm is a legal research and analytics platform that helps attorneys better estimate their chances of winning and with preparation of tactical strategies. Sign up for Docket Alarm at www.docketalarm.com today to gain insight into the PTAB and other jurisdictions.